The Slocan Valley Rail Trail is much more than a trail.

From pristine riverside rides, scenic views, side trips to restaurants, accommodation, artisans and much more. The Rail Trail is connected by history that dates back thousands of years and is well documented through signage along the route. Spend a day or two and you’ll experience a lifetime… 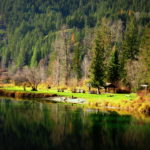 2km north of Winlaw Station, traveling via the backroad, the nature park has a beautiful grass and sand beach, clear shallow waters, as well as a gazebo, swings and a change room. 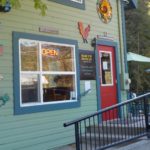 Along the entire length of the trail, a number of small and locally owned cafes are accessible via a short walk or ride. Marked signs on the trail will point you the way. In addition, the region has a number of small accommodations to make your stay a great one. 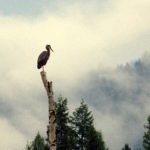 Both the Slocan River and Slocan Lake are open to fishing during certain
times of the year and with certain conditions. From rainbow trout, to Kokanee salmon, the waters run free and so do the fish. The Walter Clough Wildlife Sanctuary, north of Lemon Creek is one of many points along the trail that offers excellent bird watching. At any point along the trail you may just run into eagles, moose, elk, deer, swans, otters, beavers, turtles and more. You are sure to encounter nature’s wonders. 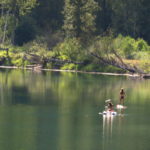 From tubing down the river, to snorkelling, fishing, kayaking or camping on Slocan Lake, the rail trail offers both locals and visitors unprecedented access to the Slocan River. There are many routes to take, so stop into a local cafe and ask for some ideas!

Between the trailheads in Passmore and Winlaw, the rail trail opens to an incredible view of the confluence of the Little Slocan River and the Slocan River. Here, the water is a deep green blue, and you can see the surrounding mountain peaks of Perry’s Ridge and Frog Peak. The closest access is from the Passmore trailhead (2km).

Got some kids who need a distraction? Along the length of the trail there are a number of playgrounds. From North to South: Slocan City (2), Winlaw, Slocan Park, Crescent Valley. 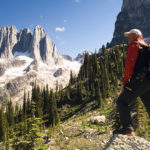 This park was created to protect the diverse topography, majestic peaks and unique vegetation typical of the Selkirk Mountains. There are many opportunities here for the backcountry adventurer. Several beaches for boaters – some for water skiers and others for canoeists. Varied and abundant hiking opportunities from short walks to wilderness treks and mountain climbing. The park has opportunities for a number of recreational activities including hiking, fishing and wildlife viewing. The northern end of the Rail Trail at the Village of Slocan has a parking area, which can be used as a base to hike into the Park. There is also a gravel Forestry Service Road that runs between our Passmore and Slocan trailheads that offers sideroad hikes into the Mulvey Basin and the Drinnon Lakes – two popular day or overnight hikes.

At the north end of the Rail Trail, lies the Village of Slocan. The village rests on the southern shores of Slocan Lake, and offers 2 docks, 2 boat ramps, a large sandy beach, as well as ample parking and shopping. There is also a designated campground that has a huge waterfall in the middle of it. From here you can access Valhalla Provincial Park trails & Slocan Lake Trails. 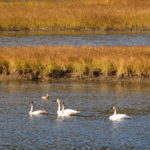 Between the trailheads in Slocan City and Lemon Creek, a rich expanse of ecologically vibrant wetlands can be seen from the trail. A part of the yearly flood plain of the slocan river, the nature reserve is a sanctuary for wildlife.

European settlement has existed in the Slocan Valley for only 120 years or so. During that short time, the salmon runs have disappeared, highways and railways have been pushed through the land and almost all traces of a way of life that existed for more than 3,000 years has been obliterated.

At Ka’ntca’k – better known today as Slocan Narrows, 1.5 km north of Lemon Creek and at Nkweio’xten, known today as Vallican, 2 sets of interpretive panels have been created by Kaslo graphic artist and sign-maker Ian Fraser that invoke the millennia of human settlement in the Slocan Valley prior to the coming of European settlers in the 1880’s.

The Columbia Power Corporation (CPC) has put in approximately 13 fish habitat structures along the Slocan River between Vallican and Winlaw, the majority along the Winlaw Rapids. They were constructed in response to CPC’s upgrading of the dam at Brilliant to help restore fish population severely impacted by development over the decades. Information signs about the structures, which are providing some success for restoring the fish population along the Slocan River, can be viewed from the trail.

Pilings Along the River 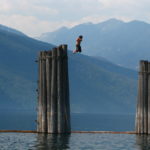 Up until the 1950’s the river was used as a transportation corridor for saw logs. From Crescent Valley to Slocan you’ll note pilings along the river, which are the remnants from this era. Logs were trapped and stored alongside the river in booms before getting sawed into lumber at the many sawmills along the river.

About the Rail Trail